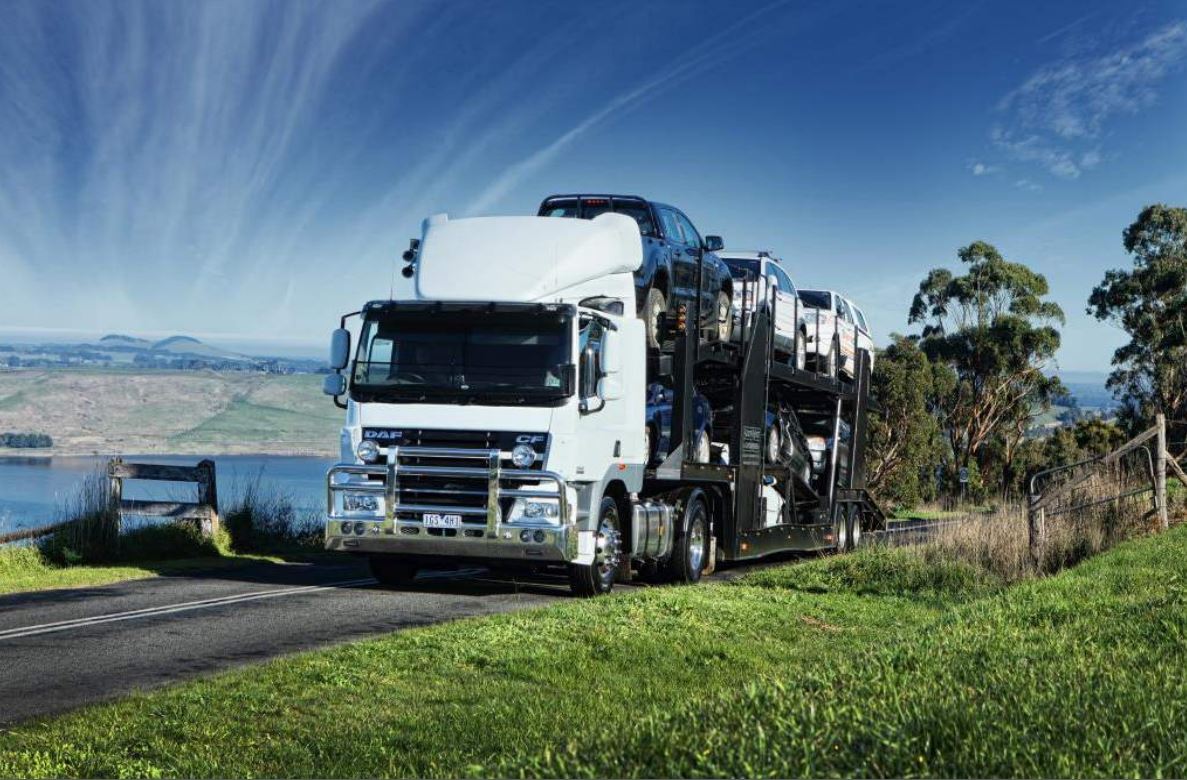 Growing up in the township of Casterton, 40 kilometres from the Victorian/South Australian border, Simon would stand out the front of Sacred Heart primary school and signal the passing truck drivers to sound their air horns, when he was young.

It was this love for trucks that inspired Simon to get a semi-trailer licence shortly after his 18th birthday and began carting hay for his family’s sheep farm, located in the historical town of Camperdown, but soon enough Simon decided to go out on his own.

He speculated that he would always have a job transporting cars because the world was not going back to the horse and cart anytime soon; people would always need cars and his services would always be in demand. With that said, Simon and his wife Gabby started Gill Freighters, their first car carrier business, back in 2001 in Geelong. In 2009 they sold the business and moved back to Camperdown for a ‘tree change.’

It was in Camperdown that Simon noticed a gap in the same-day/next-day delivery market for transporting cars, caravans and boats from Melbourne to Warrnambool, Colac and Mount Gambier. And so he and his wife, Gabby started up, South West Car Carriers.

In the beginning, Simon and his father Gerard, worked extremely long hours to get on top of jobs. This led to the purchased of a second truck but discovered they still couldn’t keep up with the workload or make any headway with the business. It was only when Simon purchased a third and fourth vehicle – two DAF CF85 prime movers – the company dramatically increased its versatility, capacity and productivity. Today, Simon manages his business with less stress and more joy. Employs four full-time drivers to operate four trucks, servicing car dealerships.

Simon took delivery of their first CF85 prime mover in March 2016. One month later he purchased a second CF85. The company wasn’t planning to purchase two DAFs in a two-month period, but as Simon explains, the price of the sleeper cab and a growth phase for South West augmented an opportunity he couldn’t refuse.

“Because we started doing overnight runs from Melbourne into Adelaide, we really felt we needed a sleeper cab. We looked around at all the different brands and in a nutshell, the DAF was a great package and reasonably priced, so we bought one.

“After the first week, our driver Mark, who has driven every truck under the sun, thought the CF85 was very driver friendly with plenty of power. Once we looked at the longevity of our loan arrangements and the idea of shuffling loads around for urgent deliveries, we didn’t hesitate to buy a second one… and that’s exactly what we did,” recalls Simon.

“Both drivers mentioned they were getting very good vision out of the cab, which is a major safety feature for us,” says Simon.  “And on the first day in the yard, our driver was sitting behind the wheel in idle mode and he heard our older truck in the background was a little bit noisier than normal and felt something was amiss – and he was right on the money. The engine noise is so quiet inside the DAF, you can hear everything.”

Because South West was able to purchase the right chassis length with the right sleeper cabin size, they have been able to achieve much higher payload capacities than ever before. Simon’s trucks can now carry two extra assets – a minimum of six 4WD vehicles – with the CF85 for every load, compared to only four 4WDs when he started in the carrier service industry 16 years ago.

“Every other truck we looked at, we were going to have to extend or shorten its chassis length to get what we needed. But the DAF chassis, including the sleeper, comes stock standard with a wheelbase of 3.6 m and rear overhang of 0.99 m. It’s perfect for us because it means we can get the maximum payload on it all the time.”

When drivers travel through metropolitan areas with empty loads, the ZF auto transmission interprets the situation promptly and shifts between only the necessary gears to suit the weight which the DAF is pulling. Once loaded, it reverts back to alternating through the gears normally. Simon feels the ZF is sufficiently comfortable and at times vital to travelling without delay.

“The ZF is as good as gold! It’s really responsive when you need to whiz around the city streets,” he says. “It feels like driving a ute with an empty trailer. When I first used it, I couldn’t believe it – it’s just so efficient to get around.

Once Simon looked at every truck on the market that suited his price range, he researched the integral spare parts brands associated with truck companies. He stressed that this is where he found a competitive advantage.

“We didn’t know much about PACCAR before we bought the DAFs. We were surprised at the size of the company but even though we’re ‘small fish’ and have only purchased a couple of trucks and a few extra spare parts, they have looked after us like you wouldn’t believe.”

As the Australian car industry faces increasing uncertainties, with many of the manufacturing plants closing down, companies like South West are staying composed and braving the way forward, looking beyond any negative flow-on effects that may result in the short-term.

Simon has a self-imposed mandate to expand the company again in the near future, but the one prospect that seems certain is that his two young boys – Jackson (aged 11) and Bohdie (aged 9) – will eventually be taking over the South West reins. Jackson, who recently graduated from Grade Six, is apparently full of information on how Simon should be running his business.

“He reckons he’s going to go to university to do a business diploma and take over the business by the time he turns 21, so I can retire. I said, ‘Righto mate, that’s fair enough.’ And I asked him what his little brother was going to do and he said, ‘He can just drive for us, Dad.’ So he’s got it all worked out.”