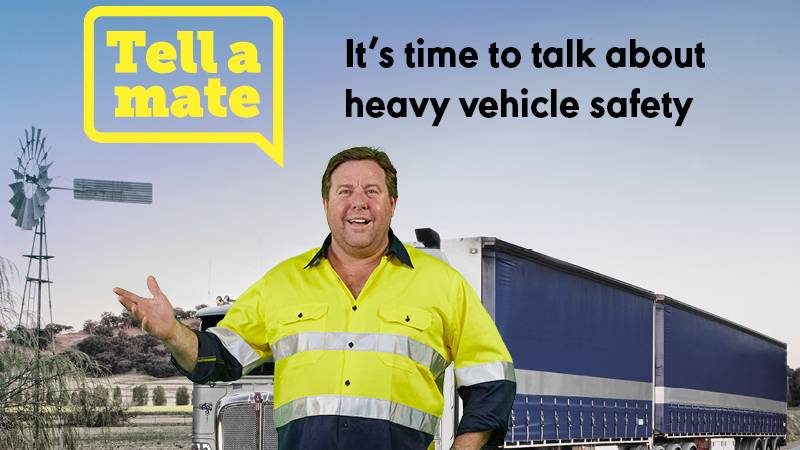 The National Heavy Vehicle Regulator (NHVR) has begun a new campaign to raise awareness for truck safety within Australia. The ‘Tell a Mate’ campaign, predominantly a social media-based awareness drive, aims to encourage those within not only the trucking industry, but across all heavy vehicle industries, to talk about safety. In a boon for the industry, Australian TV and film personality Shane Jacobson will become the face of the campaign.

NHVR CEO Sal Petroccitto met Jacobson at a heavy vehicle event in Queensland, and after being impressed by his obvious passion for vehicle safety, didn’t hesitate to approach the star for his thoughts on the campaign. To the NHVR’s delight, Jacobson was more than happy to be on board.

“If you’re a driver or operator who has been around heavy vehicles for any length of time you know how important safety is,” says Jacobson.

Road safety continues to be a major safety concern for the transport industry and within the wider community, with road deaths continuing to rise year by year. According to the Department of Infrastructure, Regional Development and Cities, there were 185 deaths involving heavy vehicles in the 12 months up to December 2017. In fact, fatal crashes involving heavy vehicles increased by 2.4% on the previous 12 months. The ‘Tell a Mate’ campaign aims to reduce these numbers by heightening awareness of best road safety practice among heavy vehicle users including truck drivers, caravan or motorhome users, and even car drivers. According to Jacobson, sharing information is the key.

“Don’t keep your safety tips to yourself. Talk to other drivers, talk to your mates who drive light vehicles or talk to everyone in your supply chain. In my experience, truck drivers love a yarn and love to tell a story, but rarely do I hear them talk about safety. The next time you’re speaking to mate, share your knowledge about heavy vehicle safety.”

The campaign highlights five key areas for discussion, including:

– Tell a mate who drives a truck not to rush for a deadline, to check that their load is secured, to avoid driving distracted and to drive to conditions.

– Tell a mate to focus on fatigue, that being dim or dizzy means taking a break, to take their time, to keep a written work diary, and to know their heavy vehicle work and rest requirements.

– Tell a mate than an Electronic Work Diary is a voluntary option for recording work and rest hours, is a regulatory alternative to keeping a written diary, can include portable devices such as mobile phones, and records time in minutes rather than rounding up work time or rounding down rest time.

– Tell a mate in your heavy vehicle supply chain that changes to Chain of Responsibility are coming, to know their role in the transport task, not to put any pressure on a driver to break the law, to minimise safety risks and to monitor safety across the supply chain.

– Tell a mate who drives a car to be truck aware, to avoid tailgating, to check if they’re able to see a truck’s mirrors, to avoid distractions, to share the road and to leave extra space for heavy vehicles to break.

It’s hoped that by spreading the message among the heavy vehicle drivers in Australia and the wider community, road safety around heavy vehicles will improve. Greater awareness of the risks and of the appropriate prevention, according to NHVR, is key to making road safety everyone’s responsibility. For more information on any of the ‘Tell a Mate’ campaign’s safety messages, visit https://www.nhvr.gov.au/safety-accreditation-compliance/tellamate.