Fuel Distributors of WA Partners with CJD Trucks and DAF 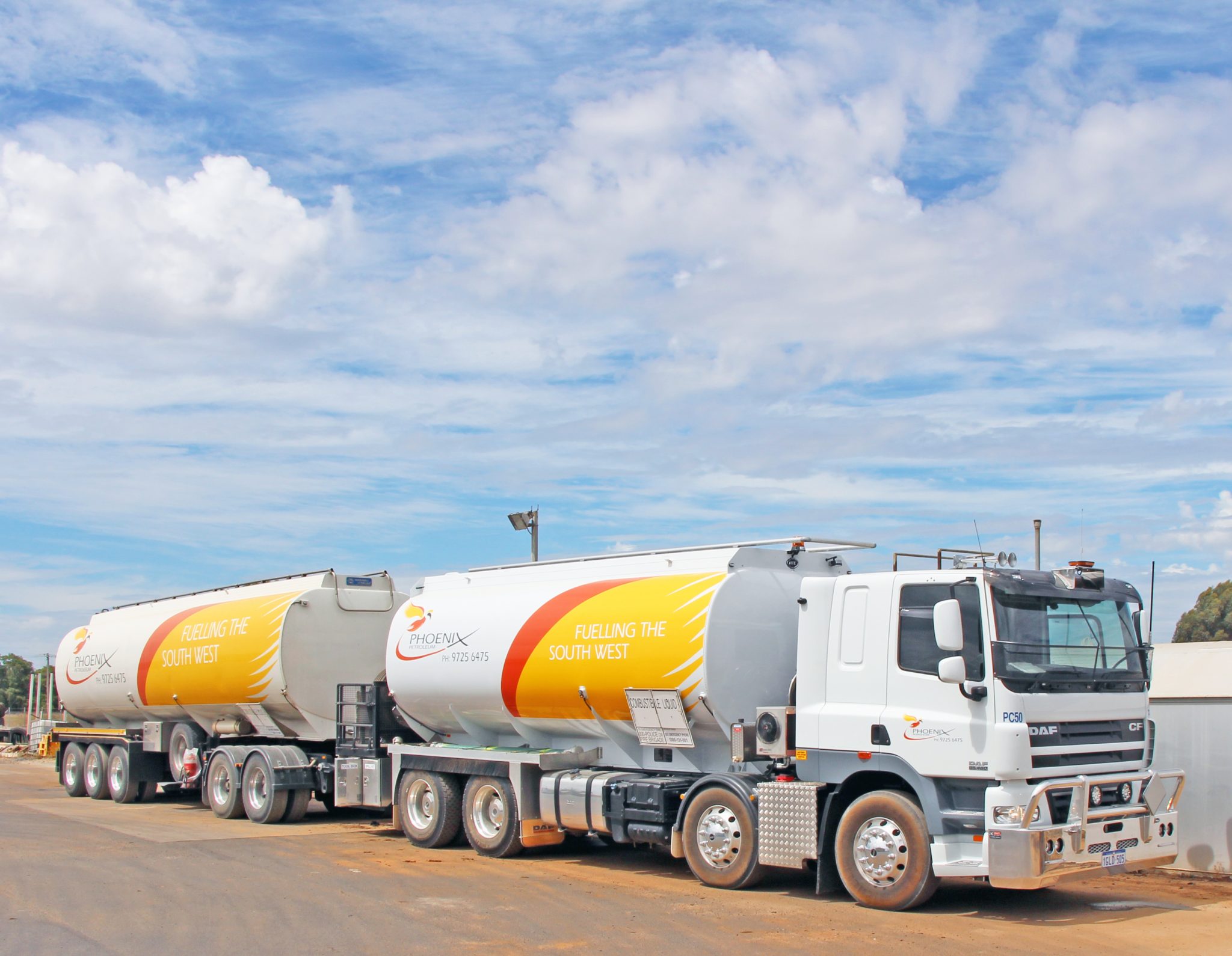 Fuel Distributors of WA Partners with CJD Trucks and DAF

Long haul specialist Fuel Distributors of Western Australia in partnership with PACCAR Australia agreed to a comprehensive two-year trial of a DAF XF105 to determine if it could meet the challenge of servicing its depots across the biggest state in Australia.

As the company carries combustible dangerous goods long distances it needs a steady platform and the DAF proved itself to be a resilient workhorse.

Delivering fuel across a state the combined size of Alaska and Texas in hot, rugged conditions is a challenge at the best of times for heavy vehicle manufacturers and transport companies.

Fuel Distributors of Western Australia, a carrier and distributor for Puma Energy, runs daily between mining depots in Geraldton in the north, Kalgoorlie in the east and Esperance in the south from its main facility in the Perth suburb of Kwinana.

In Western Australia, where commercial vehicle operators work in the upper bracket of combination mass limits, there’s perhaps not many more daunting tasks asked of drivers who are navigating distances of 600 kilometres rated at over 94 tonnes gross concessional mass (GCM). 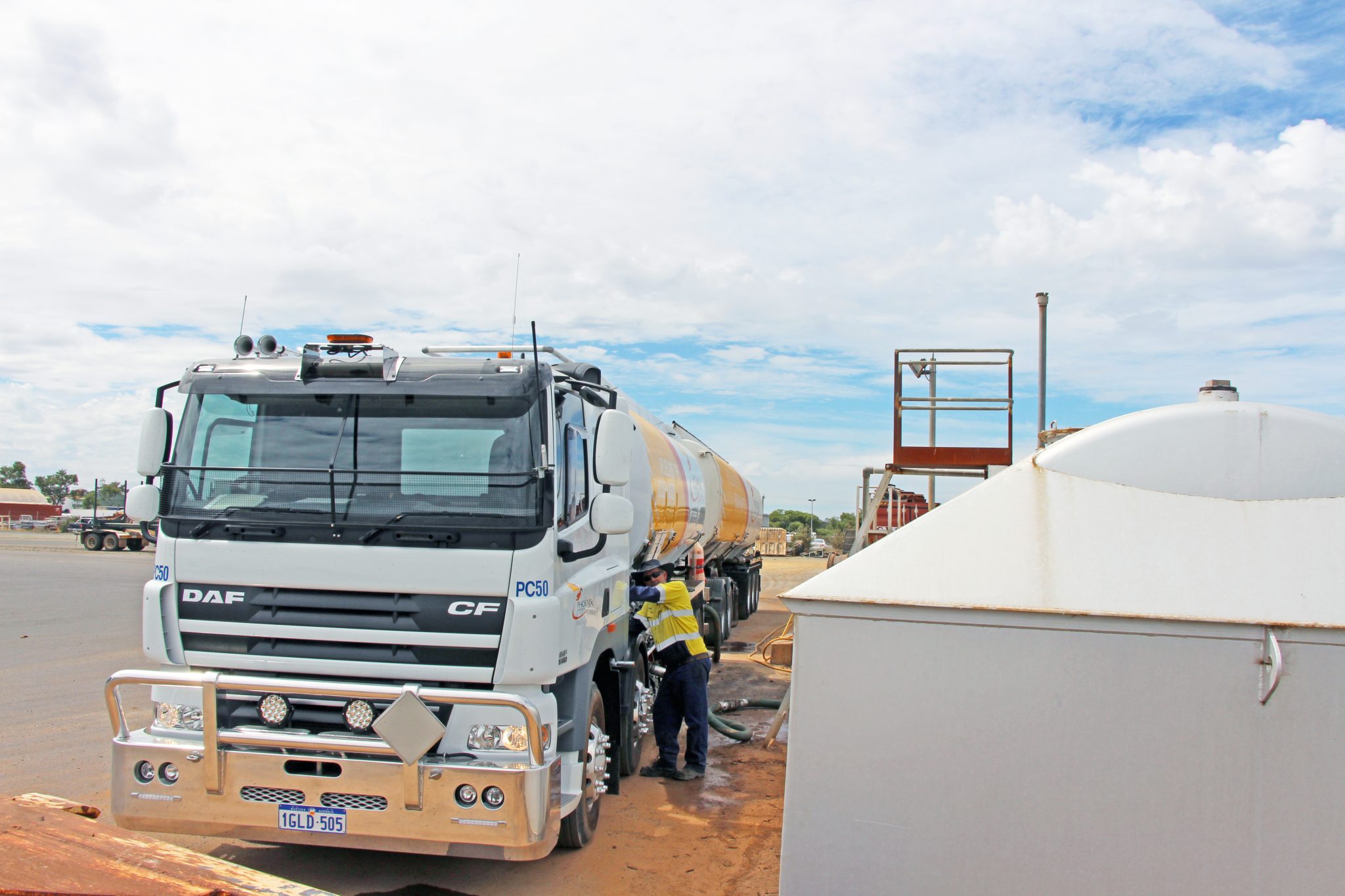 Fuel Distributors of Western Australia run a fleet of 55 trailers and 39 trucks of various makes and models.

More nominally, for the purpose of fulfilling its fuel deliveries it relies on its fleet to haul five- and six-axle A-B doubles and dog trailers.

In 2015, Graham Lock, the Fleet and Workshop Manager at Fuel Distributors of Western Australia, was approached by CJD Trucks to trial a DAF prime mover, specifically an XF105 on one of its regular commercial linehaul assignments.

The XF105 is powered by the PACCAR MX engine producing 1850 lb-ft of torque from a 13-litre engine, however the standard GCM rating is 70 tonne, Graham recalls.
In the fuel road transport industry in Western Australia commercial vehicles are required to carry upwards of 88 tonnes. That often means balancing 23 tonnes on the tri-axle, 17.5 tonne on the driveshaft and another 17.5 tonne on the dollies.

“So I told them it would have to be 88 tonne rated or it wouldn’t be any good to us,” he says.

Once the evaluation was underway, CJD performed regular scheduled inspections of the running gear, monitoring wear on the components to check how the DAF XF105 was handling the gruelling conditions. 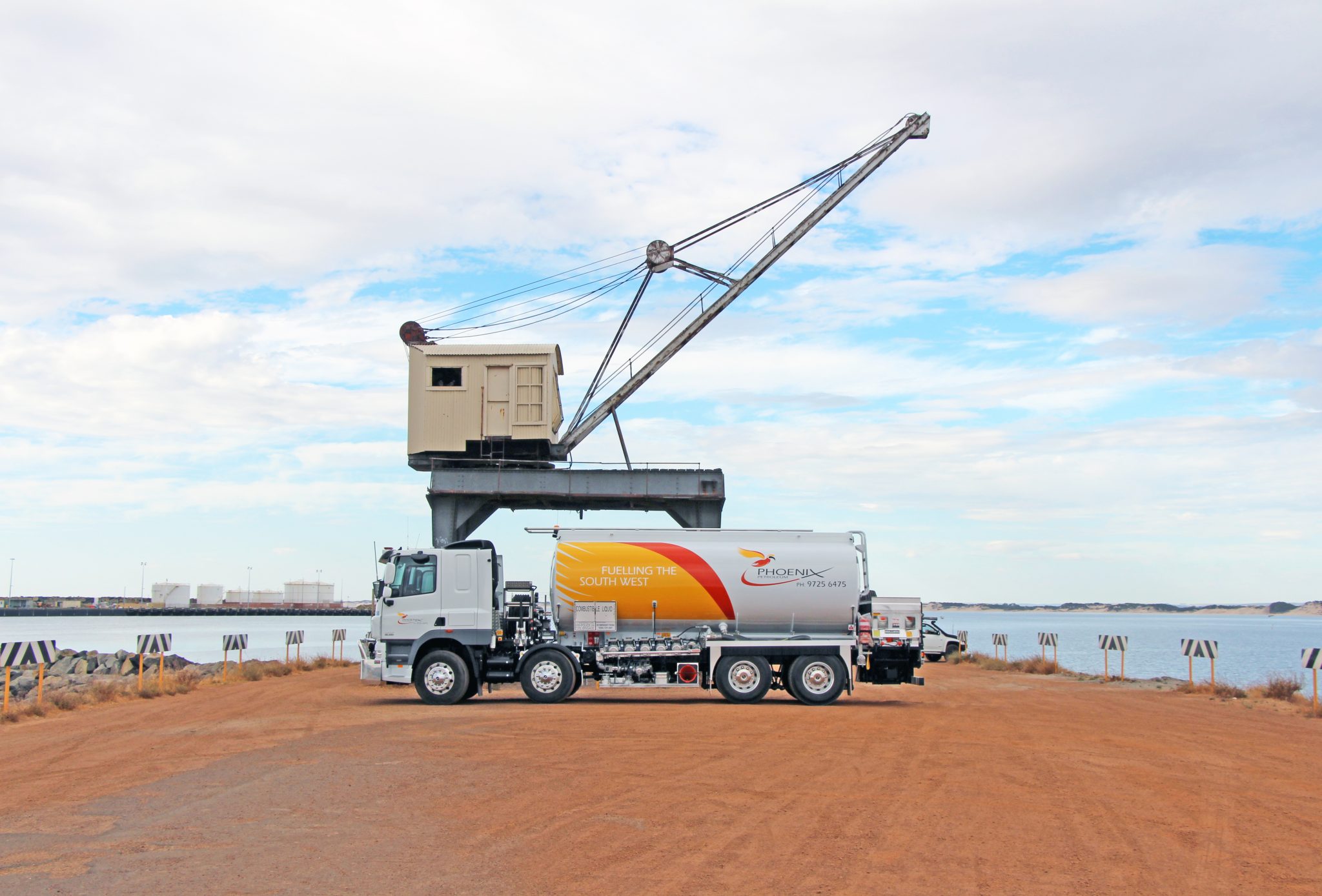 “We ran the vehicle every day at 94.5 tonnes and I must say it did a great job,” Graham says. “It would go anywhere a pocket roadtrain in a six-axle dog application would go.”

The same driver was employed during the review period to ensure the daily journey was both familiar and data was not skewed by too many different variables. According to Graham, the results in fuel efficiency were most pleasing.

“Running on 510 horsepower I thought she might be a bit slower and may not get the fuel economy we were looking for but the DAF certainly did get it and it wasn’t slow either,” he says.

“It achieved a 1.7 kilometres per litre in fuel burn. That’s very good for 94.5 tonne prime mover with a 13-litre engine.”

Having been more accustomed to the results he had previously seen in fuel economy from the bigger 15-litre engines propelling Kenworths, Graham says he was pleasantly surprised by the results the DAF XF105 was producing.

“It did the job week in and week out,” he says. “Four years on and it’s still doing the same job today as it did when we first trialled the vehicle.”

Some 486,000 kilometres later, running between Wagin, Pingelly and a new depot in Cunderdin, the DAF has certainly had its work cut out for it.

Aside from some oil testing for different OEMs over the years, Fuel Distributors of Western Australia has never, according to Graham, completed comprehensive testing of this scope over such an extended trial period.

The business, which was founded in 1999 by General Manager Craig Burrows and celebrates its twentieth anniversary this year, has since purchased two more XF105s once DAF confirmed it would rate the trucks at 88.5 tonne GCM.

The DAF eight-bag Electronically Controlled Air Suspension (ECAS) is a vital component for heavy vehicles especially those that operate in and out of farms, all of it done at high idle, while the hydraulics are being driven by a power take-off (PTO) pump.

“It’s probably the most stable platform for fuel haul,” says Graham in reference to the ECAS. “Theirs is a bit lighter than most and that’s important for a business like ours as well.”

“The DAF suspension in combination with the DAF 1360T rear axles provides us with the flexibility to deliver greater than 70 tonne GCM ratings to specific applications such as Graham’s without the need to modify the vehicle,” he says.

“Being able to raise and lower the rear suspension by as much as 220mm via the ECAS remote control unit makes hooking up trailers far easier and safer for drivers, and makes positioning trailers perfectly in loading bays a breeze.”

All DAF prime mover models are now available with disc brakes all-round, along with axle load monitoring in addition to ABS and EBS as standard according to Paul.

“Inter axle and cross axle differential locks are fitted to get you out of trouble should more traction be required, and driveability is further enhanced with the hill hold feature,” he says.

At present Fuel Distributors of Western Australia is running another DAF; a CF85 8×4 rigid configured for urban application.

“It’s a beautiful truck to drive, the driveability is first rate with a very responsive engine.” says Graham.

Over the past 11 years Graham has helped establish a workshop on-site. Prior to that equipment was sent out for servicing and repairs.

The company also runs a second workshop in the nearby industrial area of Naval Base, where it repairs its tankers. 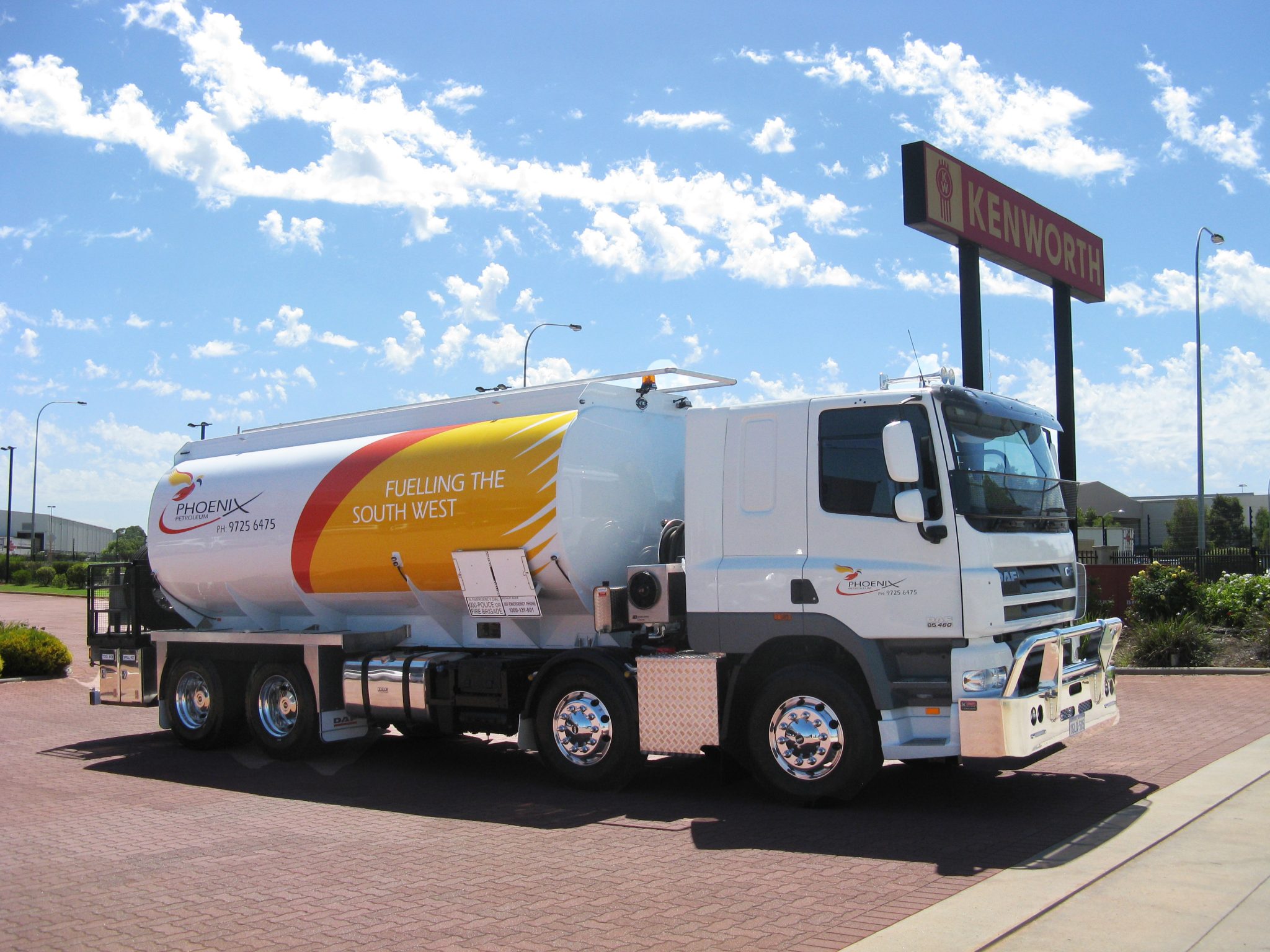 Since he began working at Fuel Distributors of Western Australia the business has nearly quadrupled in size. DAF and the team at CJD Trucks have helped grow it.

According to Graham, having the best products in the world is all for nothing if the customer is not taken care of. “They may as well not have it,” he says.

“DAF is a great truck at a good price and CJD Trucks really look after us. They’ve gone out of their way to make sure we are happy.”