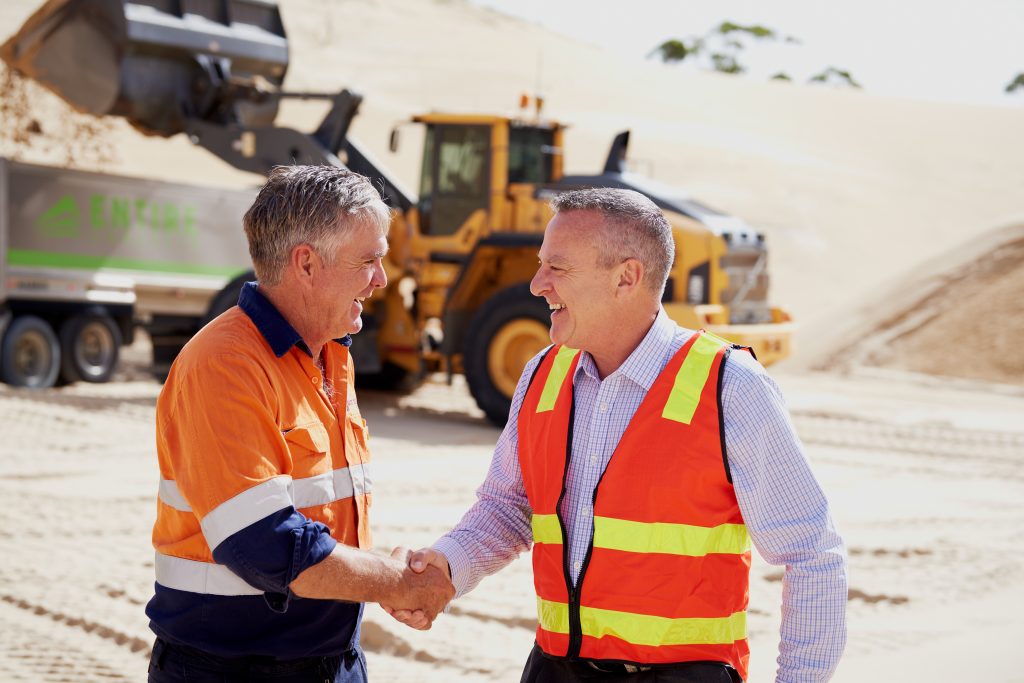 In the industry of premium quality fine sand, Macka’s Sand & Soil Supplies is a big name renowned for its top-shelf sand and soil products for the commercial, building/construction, glass and turfgrass industries locally and internationally.

The pristine windblown sand is collected from the coastal region between Newcastle and Port Stephens where mountainous sand dunes stretch out as far as the eye can see. 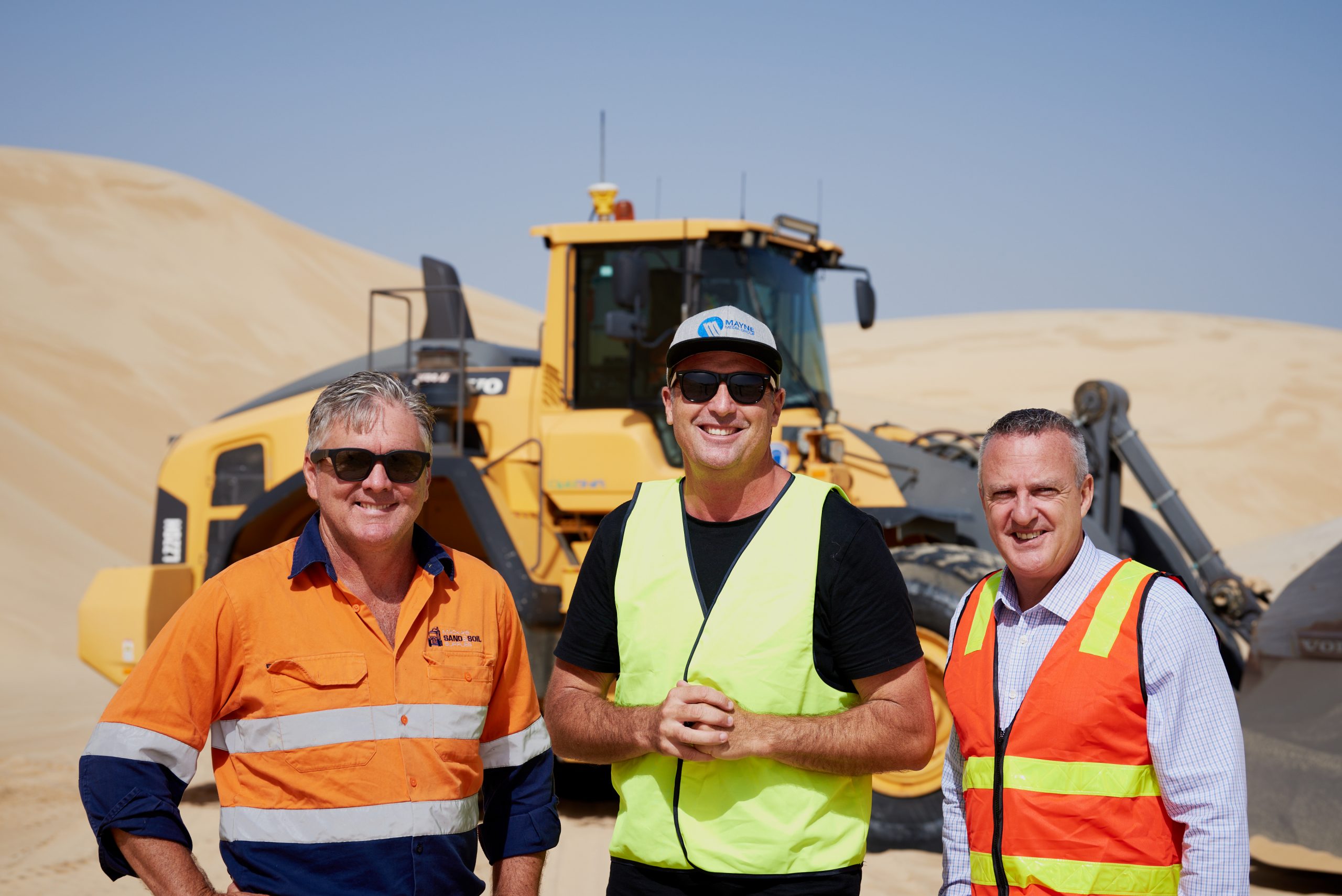 Macka’s Sand & Soil Supplies is a family run business set up by Robert and his father Bruce Mackenzie some 30 years ago. Back then in 1991 the plant consisted of a single 1830 Acco truck and a Case Backhoe.

Rob shared, “I remember delivering sand at night after working a day job at ACI. I also remember sometimes having to shovel the sand off the back of the truck by hand if the site had an incline.” 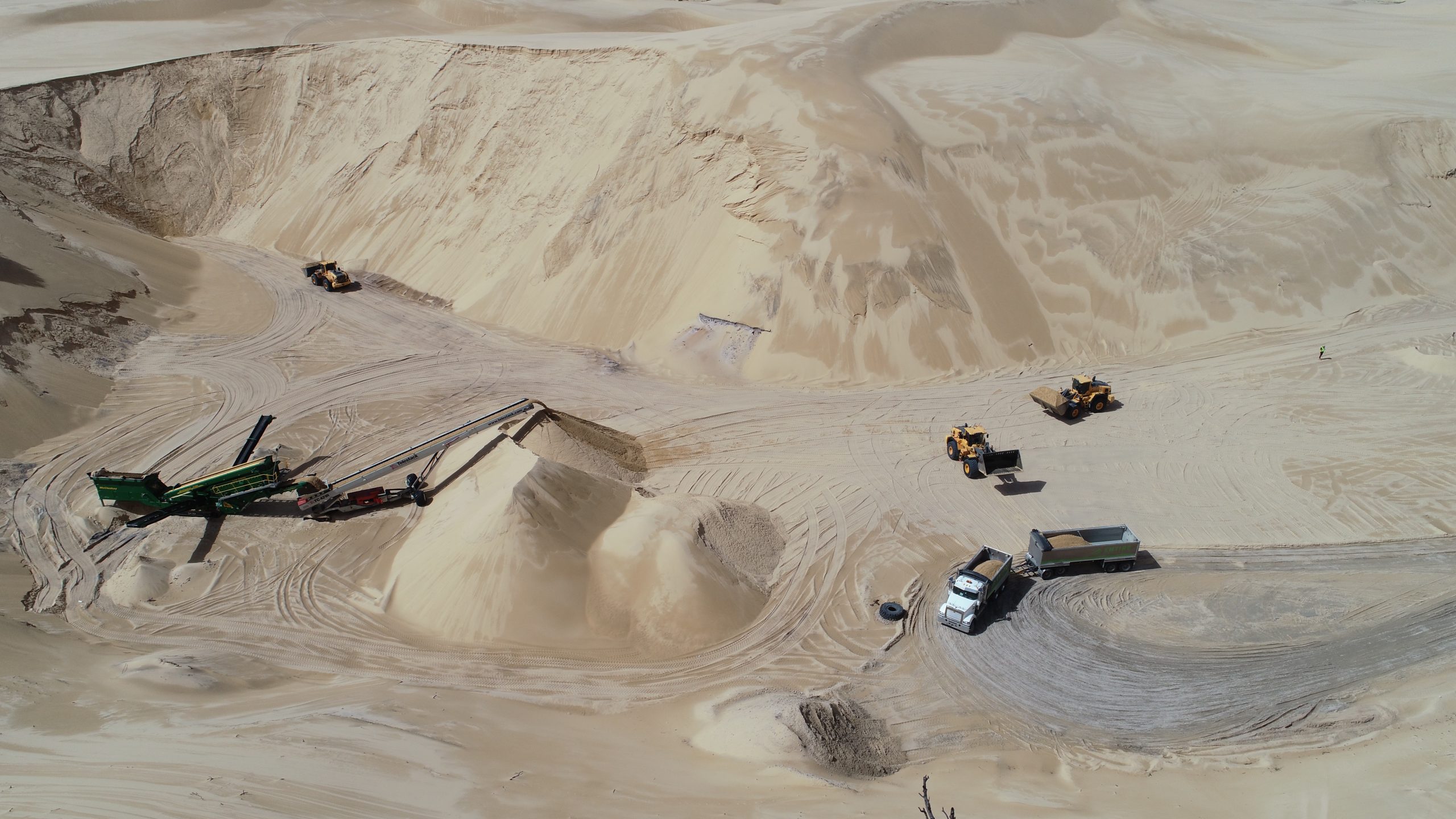 Times sure have changed from those humble beginnings with Macka’s Sand & Soil Supplies now being one of the largest operators on the east coast of Australia moving 2 million tonnes of pristine Stockton sand per year.

Rob’s two sons have also joined the company, which he said, “All things considered it is working out great. Of course, at times, family businesses can have their challenges, but generally things have been going great with my boys!”

When asking Rob about the main focus of Macka’s Sand & Soil and a little bit of his history, he shared, “The main focus of the business is pushing out a high-quality, cost-effective product into the building/ construction industry, glass industries and turfgrass soils. Being located on the coastline behind the Stockton Beach area we are extracting the windblown dune sand along the edge of the coastal fringe. For me personally, I started out working in a sand mine called ACI when I was 18. I leased a block next door with an option to purchase when I was 20, and here we are today – one of the largest operators on the east coast of Australia moving 2 million tonnes per year.” 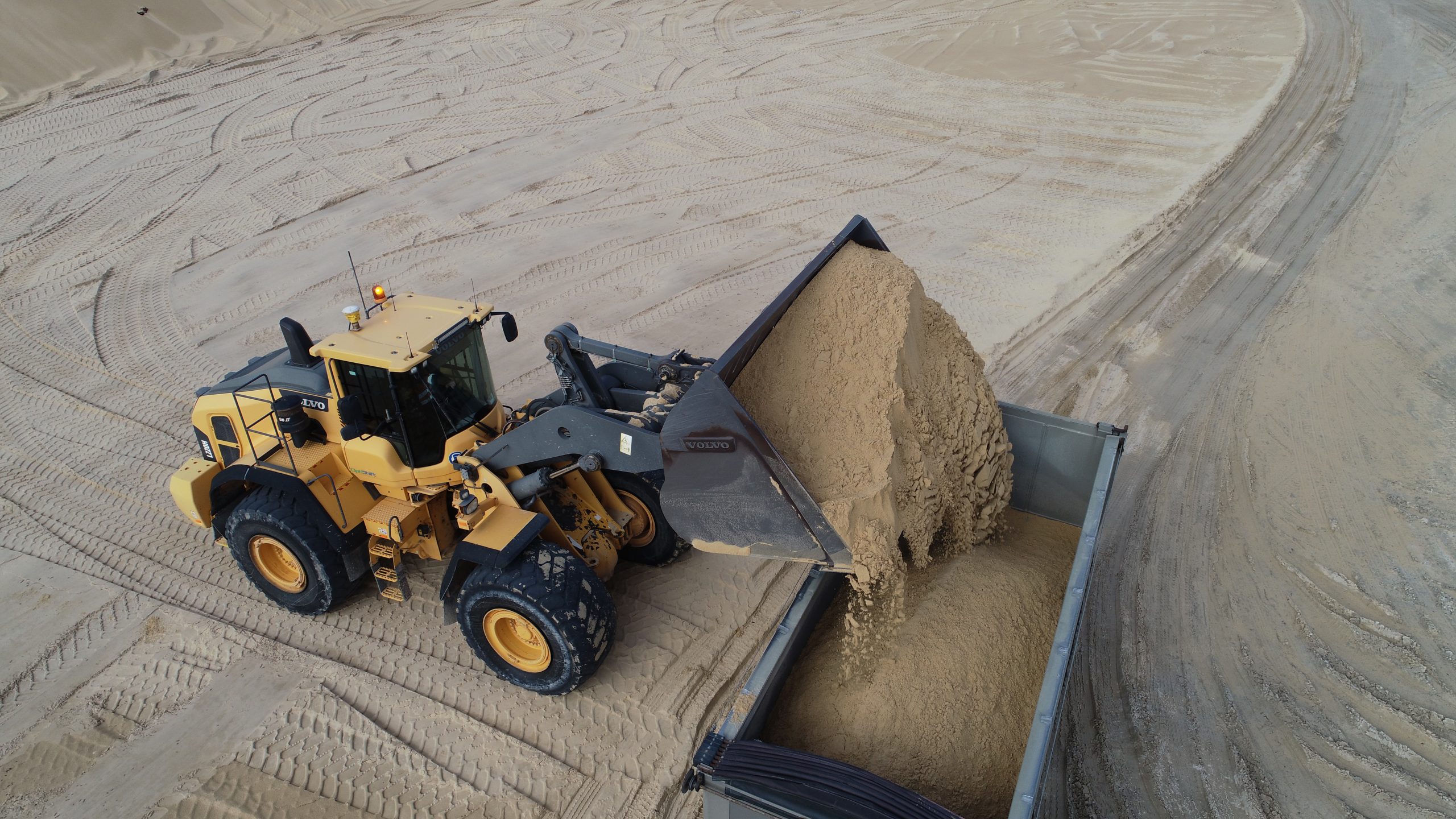 With mountainous dunes surrounding the operation, it’s easy to see how the team at Macka’s are moving 2 million tonnes of sand consistently per year. And with such substantial volumes of sand being processed, there is an equally important requirement for the right machinery to remove, screen, process and load into the queue of trucks delivering the sand products across NSW, Australia and internationally. Macka’s has exclusively run with Volvo machines for decades, and the relationship with CJD Equipment is as strong as the Volvo L22OH wheeled loaders that work tirelessly day in day out on the Macka’s operations. The efficiency of this outfit is truly impressive.

Rob started out on a Volvo 120D, and after trying the competition at times when working for other outfits, Robert always found himself coming back to the Volvo machines.

Rob explained, “The fuel efficiency and cost saving are great, but the essential factor for me was the operator comfort. Our employees love driving them and they stand up to the conditions and workloads. Our operators have always provided great feedback and reliability is second to none. Our Volvos and our relationship with CJD Equipment are an integral part of our success.” 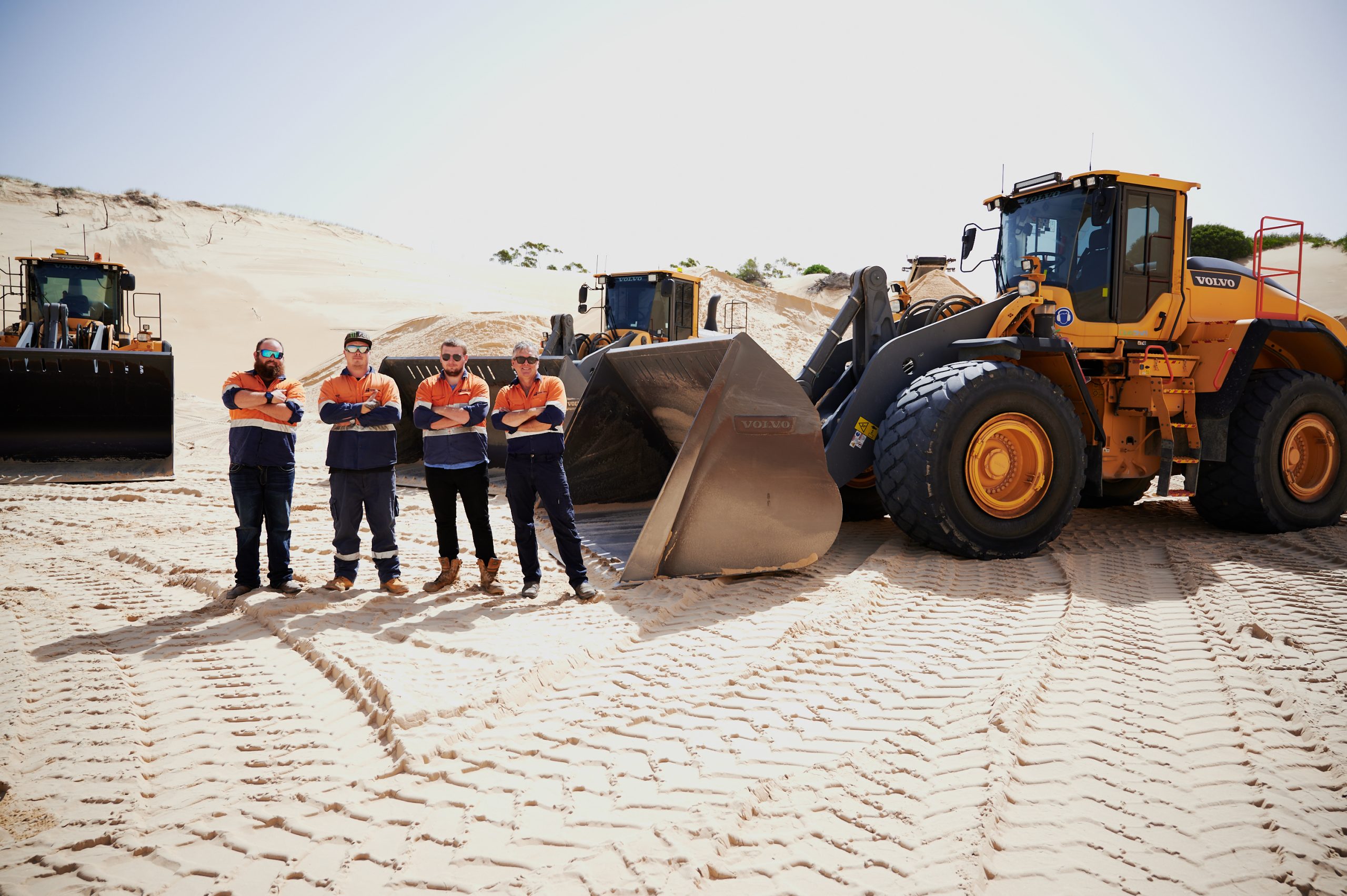 From discussing Macka’s machines with Rob and Michael Lombardo, GM of CJD Equipment NSW, it became evident that there has been some unique customisation developed to maximise the efficiencies of the Macka’s Volvos.

“It’s a pretty fast-moving pace on-site and the Volvos navigate in and around each other with precision manoeuvring that does justice to the skill and the hours that the operators put in,” said Michael.

Rob says what sets him apart from his competition is his hands-on approach and operating hours to support the communities in his area.

“Our hours of operation, hands-on approach and the desire to supply all industries that have a use for sand and soils is no doubt the secret to our success. We have also put a lot of importance in the value of working with the communities of our very important area,” he said. 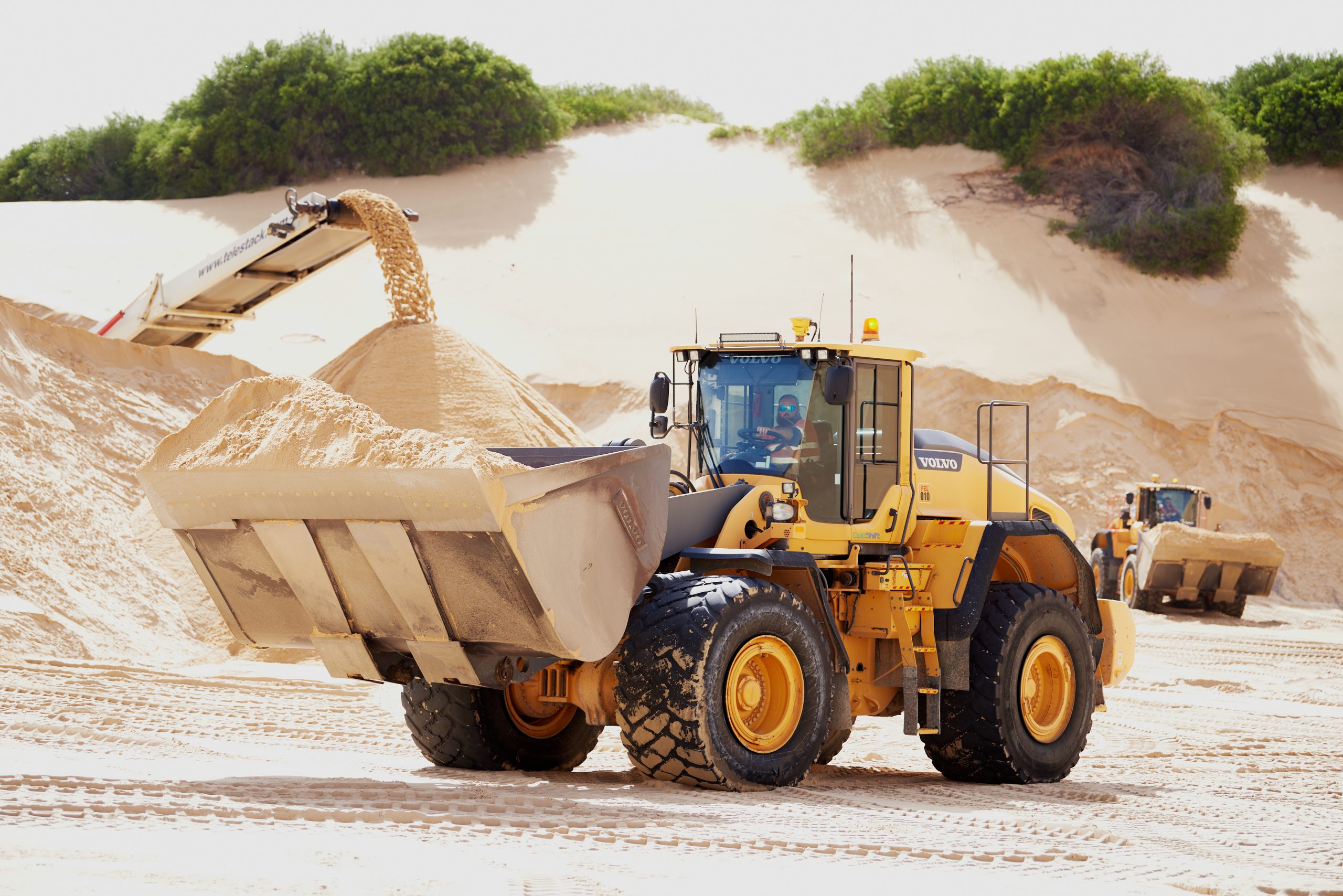 Michael’s personal relationship with Macka’s goes back 12 and a half years with Rob and his father Bruce, and with CJD Equipment’s relationship going back well beyond that it’s great to see such partnerships and loyalties stand the test of time.

Michael shared, “It has been a pleasure to work with both Bruce and Rob over the last 12 years. During this time, apart from supplying their machinery needs, we have worked together to deliver buckets that meet the maximum efficiency requirement of their loaders. It’s this close type of relationship where we can go the extra mile to meet our client’s expectations that we pride ourselves on here at CJD Equipment. Working in and around sand dunes and coastal salt-air environments can be very hard on some machinery, but we have been thrilled with our Volvo’s ability to excel over long periods of time in these testing conditions. A fact that has been equally appreciated by the team at Macka’s Sand & Soil.” 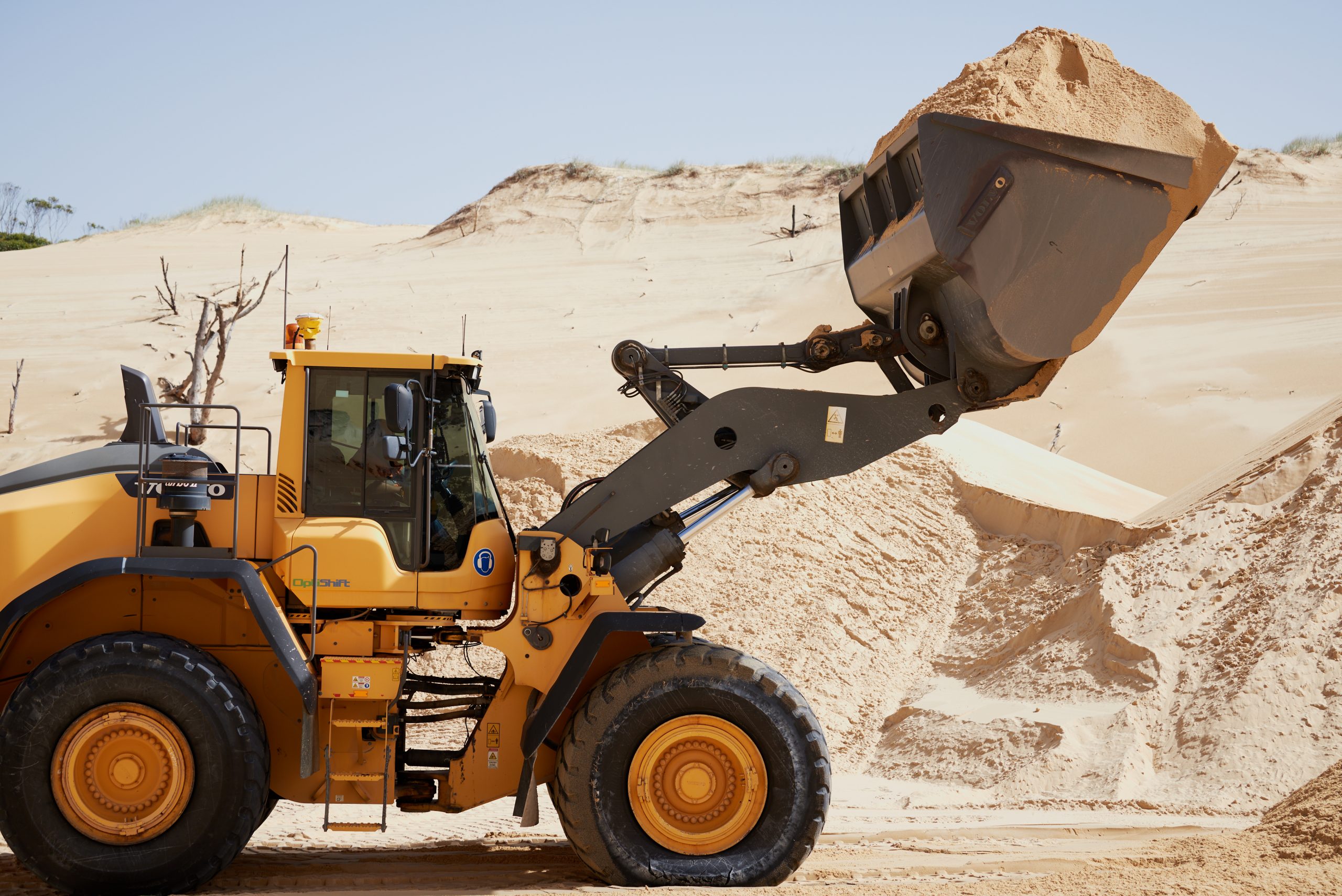 Michael continued, “Rob has a mix of Volvos throughout his fleet; however, purchases over recent years have concentrated around the L220H series wheeled loader. There is a very close relationship with CJD Equipment and the Volvo product that Rob developed, and he has a wealth of knowledge and market intelligence about what is going on in his immediate area and the greater Newcastle region, where we often sit and discuss over a coffee. Rob allows us to work collaboratively with him throughout his business, from the point of purchase and machine setup through to the level of aftersales support we can offer him, resulting in maximum uptime.”