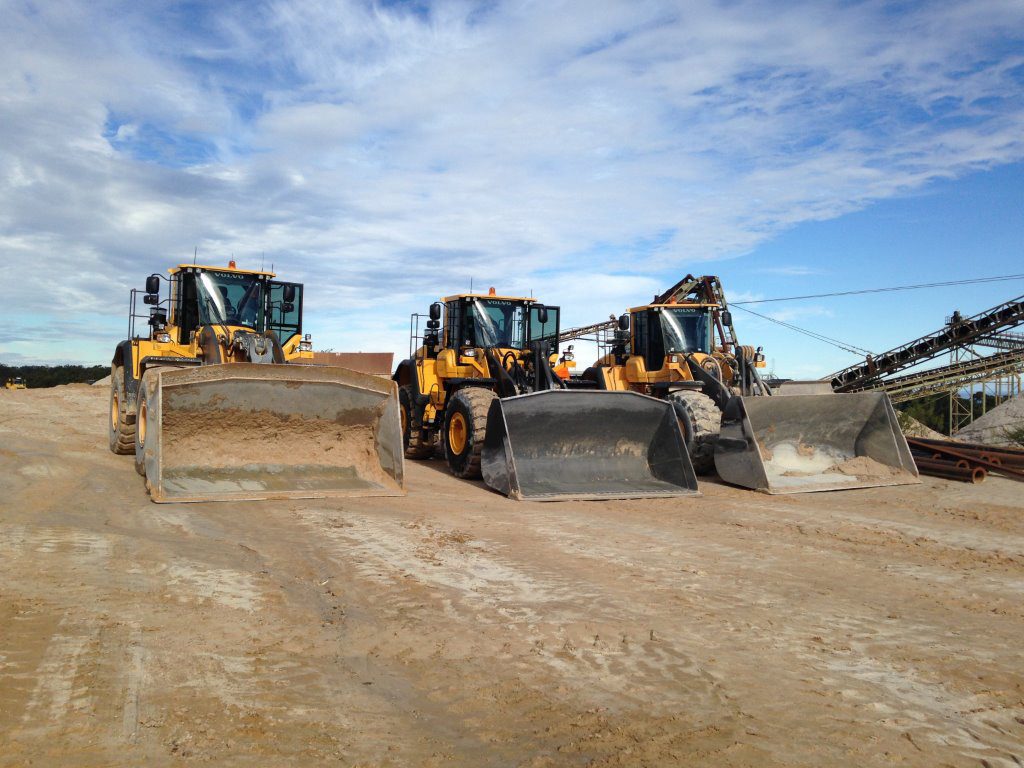 Dixon Sand, a respected customer of CJD, and their impressive fleet of heavy machinary are featured in the latest Australian Earthmoving Magazine. The legendary story of their family owned business is a fantastic read, and their nod toward CJDs umatched service over the years is great recognition for the Sydney CJD Equipment team.

This editions story in no different from any other as we jumped at the opportunity to meet with Dave Dixon, who is part of the family owned business Dixon Sand. It was Dave’s father Ken Dixon who started off this story, establishing Dixon Sand in 1955 owning several quarries in the Sydney region before settling at their current main site in Maroota in 1992

The foundations of the company are legendary, with Ken beginning the operation hand shoveling eight tonnes of sand every morning and night from a sand deposit based in Londonderry. Ken would then cart the sand to a gentleman’s place in nearby Penrith and tip it off to be on sold by the shovel full to the locals throughout the day. It wasn’t long before Ken had the genius idea to purchase the land in Londonderry so he would be able to fence it off, dig and own the sand. Following a few enquires to council, Ken quickly learnt that the very gentleman he had been selling the sand to in Penrith actually owned the land he had been taking the sand from. Ken feeling instant guilt fronted up and confessed immediately. The gentleman was impressed with Ken’s straightforward and honest approach and after listening to his plans agreed to sell Ken the block of land in 1958.

The very first piece of equipment owned by Dixon was an old six tonne tipper truck which had a loader bucket attached to the front. There was a winch cable that you would pull, lifting the bucket up and over the cab into the back. It was a very primitive operation however it was an enormous advancement from the hand shovel!

The quarry was always a part of Dave’s life however he never envisioned his future of working there. Once he finished his HSC, similar to most young men he wasn’t sure what he wanted to do career wise so his father suggested he work at the quarry until he could figure it out. Dave will never forget his first day on the job, driving in with excitement and seeing his father’s friends who had watched him grow up all standing there. “We have been waiting for you” they exclaimed, handing him a shovel and sending him to shovel out wet sand under a feed bin with limited height forcing him to crouch down whilst digging. He came into work the next day aching, with band aids wrapping every finger to cover all the blisters however he was determined to earn his stripes and get the job done. Dave remembers it took him three days to shovel all the sand without a single whine or grimace and he took great enjoyment from completing the task, walking up to them, handing back the shovel and asking, “what’s next”. This was in 1989 when Dave was seventeen years old and it is only fitting that Dave just like Ken started in the business with a shovel in his hand, working hard to progress through the company, eventually learning how to drive the machines, about the quarry game and the business as a whole.

The pivotal moment for the Dixon Sand quarry business was certainly the acquiring of the Maroota plant. Dave remembers the day clearly as it was the 1991 grand final and the Penrith Panthers were playing the Canberra Raiders. Dave and his father got up at 4:00am that day and drove out to Maroota to meet the land owner on the site to have a look around. This turned out to be a great day in their history, as not only did they decide to purchase the land resulting in expanding their quarry business significantly however they went home to watch the Penrith Panthers defeat the Canberra Raiders 19 to 12.

There are a few key ingredients which make the Maroota site great for quarrying including old alluvial deposits which produce coarse river bed sand and gravels ranging right down to your medium and fine grade sand. Geographically it is also ideal as the close proximity to Sydney positions them perfectly to the forever increasing development market however they are still a fair way from urban encroachment.

The Maroota quarry is a bustling operation with a continual line of trucks coming and going. There are approximately twenty five pieces of equipment including fifteen frontline machines used every day. Dave says his preference regarding brands depends on the machine. Volvo loaders, trucks and excavators are miles ahead of the competition due to their quick ground speed, awesome hydraulics, supreme operator comfort and low fuel consumption. CJD Equipment the Volvo dealer additionally provides a flawless back up service. If you purchase enough machines you will have the occasional issue and it is how the people deal with the issue that is the true test of a companies merit and CJD are unmatched.

In addition to machines, they utilise some interesting attachments including their recently purchased Xcentric Ripper. Traditionally they have always used dozers for ripping sandstone out of the ground, they will then track roll it with the dozer, bring it up to the plant and use the crushers to turn the sandstone into sand. With the Xcentric Ripper, they will have the ability to rip the sandstone out of the ground in a different manner and a more cost effective way. One of the Xcentric Rippers stand out features is the limited noise omitted when carrying out hammer work which is fundamentally important when there are noise restrictions on site. Dixon learning about the Xcentric Ripper was almost by accident as they were viewing some other equipment at another quarry when they stumbled on it being tested. The idea sat in the back of their minds for a couple of years before they became busier requiring greater production capability so decided to take the plunge and go ahead with the purchase. Wayne at Xcentric Ripper was very easy to deal with, all of his product information was accurate and he is an honest, genuine person which is refreshing.

Presently Dixon Sand is predominantly a supplier of mortar sand which is their biggest seller. Their specialty sands are supplied to numerous sports fields including Alliance Stadium, Telstra Stadium and The Sydney Cricket Ground. Their work expands to golf courses, various drainage specialists as well as many other specialty applications. Being a wholesaler they have a set clientele, rely on word of mouth for their business and don’t advertise at all including not even a sign out the front. They prefer to remain low key and let their work do the talking. Dave refers to this as ‘The McDonalds theory’ and explains that before you go in and order a Big Mac you already know what it tastes like and what you are going to get. It is all about consistency and Dave continually stresses this same analogy to all of the guys on site.

Dave throughout our entire meeting solidifies that Dixon is a family business that are fortunate to have numerous staff that have been part of the company for a long time and are thought of as family. As a self-confessed prankster, Dave’s management style is relaxed as he believes that when you spend up to twelve hours a day on a job it is important to be enjoying yourself and having a laugh as long as the job gets done. Also of the highest important is insuring staff safety, prioritising a safe environment at all times.

Outside of work Dave enjoys spending most of his spare times with his three year old son Corey. At the moment all Corey wants to do is play on Dads machines and people often suggest that Corey could one day be handed a shovel. Dave is adamant however that Corey can do whatever his heart desires in life. At this point his primary focus is on completing jobs around the house to earn a few dollars for which he is saving to buy his very own digger. Corey absolutely loves his diggers and will sit for hours going through the Australian Earthmoving Magazine, which is his favorite book!

Sadly Ken passed away six years ago and would have owned over a hundred machines however his 1968 Caterpillar D17 dozer was the one machine that he absolutely loved. It is an open cab with a canopy and even on the hottest day recorded in Sydney some years back he was out on that machine all day. It absolutely fried him but he loved every minute of it and sitting there on his Dad’s machine was the absolute best to Dave. To maintain these fond memories Dave is now restoring this same machine with the vision of one day passing the old Caterpillar D17 onto his own son.

Another sentimental project Dave is excited to work on is an old truck he came across whilst visiting a family friend who was house sitting on a farm out west. Dave went for a wander on the property and stumbled by an old orange truck with Dixon Sand painted across the side. It was established to be one of Ken’s original sand trucks from the sixties. Dave offered to buy the truck however the owner refused and instead offered to donate it back to be restored. Preserved perfectly, still with all of the original parts Dave will be picking the truck up in the next few weeks and is very keen to have this item from yesteryear. Hopefully the generations to come will appreciate these machines once they are restored and recognise that they represent where they have come from and the hard work that it took to get them to where they are. One thing that Dave never takes for granted is that he is very blessed. He along with all of the five children had a father that worked very hard for them and they wouldn’t have any of the things that they do today without him and his hard work. Dave is very grateful for what they have been given and the opportunities created by the family.

It is stories like these that really inspire us and we hope that they inspire you too. The day’s work that you have just completed is another step towards a greater accomplishment for many of us and we must not forget that we all will leave a legacy of sorts for those who work and walk in the steps beyond us. Meeting with Dave certainly motivated us to continue working hard on this magazine, making it the best that we can and we really felt honored to be able to share this fantastic tale of an incredible family business that was built from humble beginnings, hard work and of course sand!