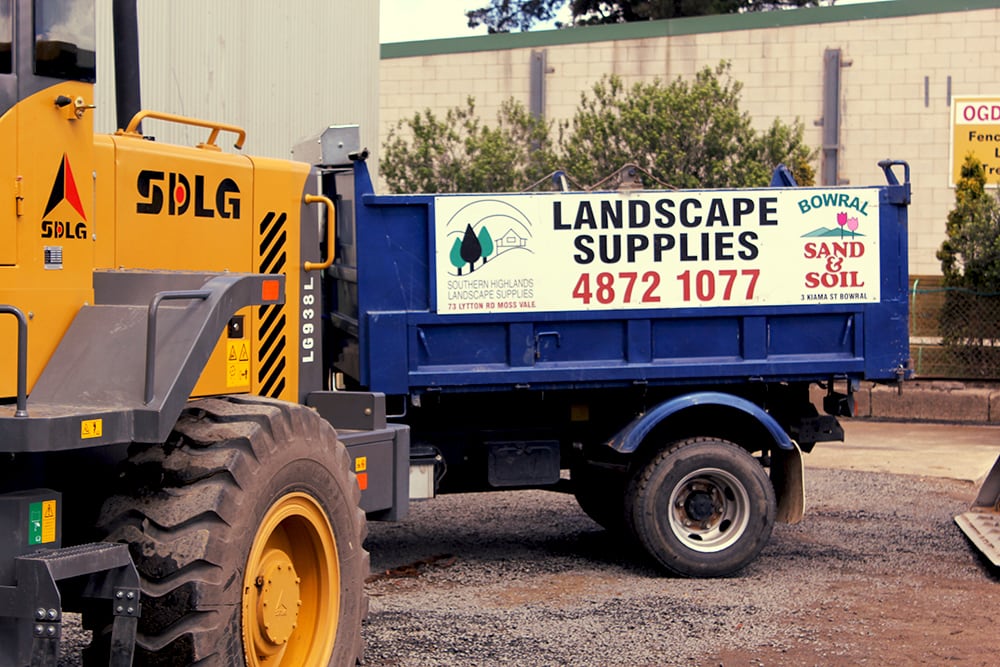 After 25 years of business John Mulready, owner and operator of Mulreadys Transport and Quarry, was ready to retire. In 2006 John put his business on the market and it wasn’t long before it was sold to long time customers, Nick and Katie Gubbins. In the early days Nick and Katie specialised in building rammed earth homes throughout NSW. Since the purchase of Mulreadys, the business has continued to go from strength to strength.

Nick Explains, “After our purchase of Mulready’s, the operation has continued to expand at a rapid rate. In 2007 we bought Southern Highlands Landscaping based in Mittagong which we have now relocated to a purpose built yard in Mossvale. Then in 2009 we acquired Bowral Sand and Soil and at the moment we are in the process of a yard rejuvenation.”

The customer base for Mulreadys in both landscaping businesses is mainly that of local councils, small and large corporate operations as well as the many DIY gardeners and landscapers in the local area to whom they supply varied types of aggregates, garden mixes and mulches. Austral Bricks has been a long-time customer of Mulreadys and the business is currently involved in some very interesting projects including the “UTS Business School Building”. This building has required a 2500t stockpile to be laid out in a very precise fashion to ensure the characteristics of each and every brick in the building is identical.

SDLG Wheel Loaders now play a substantial role in the on-going success of Mulreadys. The business has always had a mix of loaders and they have always been low hour used machines. “The purchase of the SDLG LG938 loader was the first brand new wheel loader in our fleet”, Nick says. The relationship has now gone one step further with Mulreadys being one of the first to purchase the new SDLG LG938 Series 2.

“We really like them” Nick says, talking about the SDLG Loaders. “Firstly we like the price. SDLG Wheel Loaders are great value for money and as a consequence of being able to afford a larger loader for our dollar, our productivity has greatly increased.”

“Secondly, we like the simplicity of the machines which is great because we have multiple operators with varying levels of experience and with SDLG’s ease of operation all our operators can be productive. We didn’t need all the bells and whistles, what we needed were simplicity, reliability and durability which are exactly what we got.”

“All that being said, the kicker for us was knowing that the product was backed and supported by CJD Equipment which went a long way towards our decision to purchase”. Nick also told us about his new venture to further expand his operation. He was proud to announce that “Gubbins Home Hardware” will be opening and operating in Mossvale in the second half of 2013. Nick said about the new venture, “We
have always run businesses that supply and support the local communities in which we operate. Gubbins Home Hardware is an extension of us providing the best possible service to the local areas”.