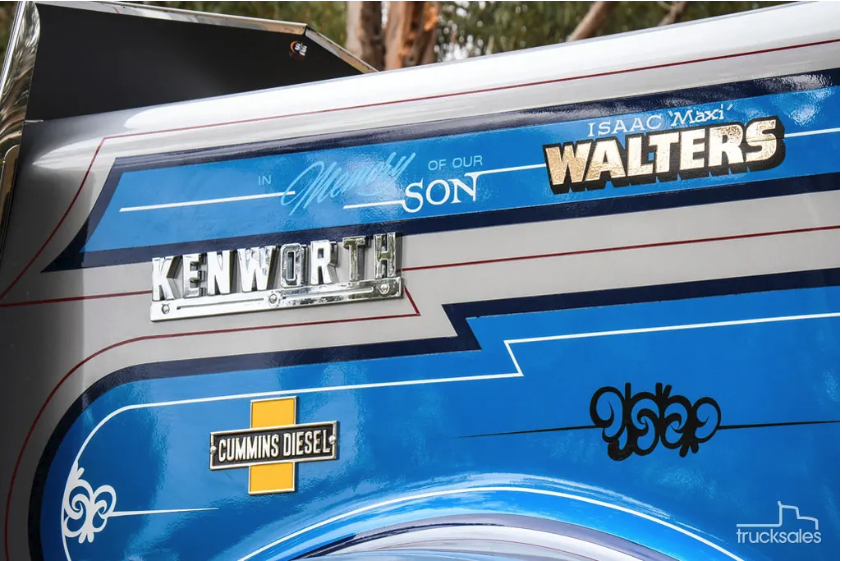 There is no doubt that the limited-edition Kenworth Legend Series trucks are special. What makes them so special is often a simple story close to the owner’s heart. This is one of those stories…

When Kenworth released the Legend 950 in 2015, the complete limited-edition production run was sold in under 48-hours. Two years on, in early 2017 and whispers of second Legend model ran excitedly through the transport industry.

For many trucking enthusiasts, the classic old-school lines blended with modern technology offered in the Legend series models was appealing enough to place an order, for others it is the chance to own a collectible piece of Australian trucking history.

However, for Chris Walters and his family, this Legend 900 is a living monument to their son, Isaac, who passed away on the 27th of March 2017.

Walters Contracting of Mole Creek, Tasmania, is very much a family business, started by Allan and Kaye Walters in 1967. The company predominantly focusses on the civil construction sector of earthmoving and road construction with material supplied from their own quarry and gravel supplies.

Their son, Chris Walters, now heads the family business, and along with wife Kim and their two sons, Joseph and Eli, the business is certainly shaping up to be a third-generation prospect.

Their third son Isaac, affectionately known as Maxi, had different ideas though. Growing up, he was more into sport than tinkering with machinery or helping out in the business.

He became an extremely talented cricketer and football player, wielding the bat for the Westbury Shamrocks and pulling on the boots for the Deloraine Football Club.

Sadly, Isaac was suffering from depression and had been for nearly two years. Why he felt there was no way out of it, nobody knows but him. But he left behind an extremely close family, many friends and his beloved teammates from cricket and football.

Over the past decade, several trucks have been built that are more than just a piece of machinery destined for a specific job, they have become a mobile monument to loved ones, treasured by the family of what they represent.

Craig Membrey’s 2006 T904 ‘4Rowan’ is one such truck, built in memory of his son Rowan who unfortunately took his own life when aged just 17. The truck also features the BeyondBlue logo, the first time the organisation allowed its name to be put to such use, and Craig is still very much an ambassador for them, spreading the word about suicide prevention as often as he can.

For the Duggan Family from Emerald QLD, their 2015 Legend 950, named ‘Speechless’ is another. John Duggan and wife Karen’s daughter Maddy, affectionately known as Mouse has Autism and is Non-Verbal, their Legend 950 was built to help spread the word about Autism and the Duggan’s favourite organisation ‘Little Souls Taking Big Steps’ who helped enormously to get Maddy where she is today.

“I was talking to Tim Cotton, (PACCAR’s Regional Service Manager) at the T610 launch here in Launceston,” Chris Walters began. “He knew about Maxi’s passing and mentioned the Legend 900 was about to hit the road and suggested that we do one to honour Maxi. Brad May was here that night so we took the opportunity to talk to Brad about our situation and Brad agreed to lock in Number 16 for us.”

Then it was down to Chris Walters’s close friend, CJD General Sales Manager Chris Saltmarsh to work together to fine tune the specs of this Legend 900 to suit its application.

Given the significance of this truck, it was destined for special duties only and there’s none more special in the Walters’ operation than hauling their low-loader and shifting their construction machines. 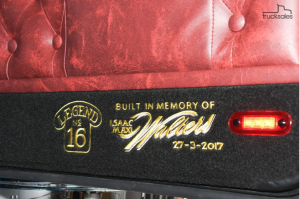 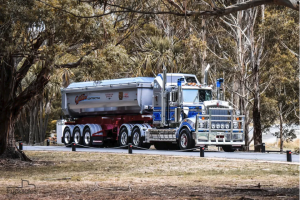 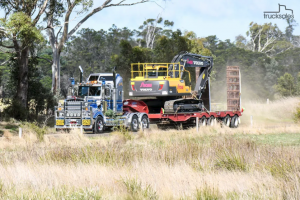 When it came time to personalising the Legend 900, both Chris Walters and Chris Saltmarsh had some clear ideas.

“We wanted to keep with the old-school W-Model theme,” Chris Saltmarsh said.

“That’s why we chose the spider wheels. The chassis has a deeper red paint similar to a truck of the Seventies era. Then for the cabin paint scheme we chose classic period Kenworth lines. On the air cleaners with added painted raised air-rams.

“The factory bullbar is kitted out with round driving lights to match the theme. The stainless work is by SLS in Rutherford NSW and the lavish signwriting and mural commemorating Maxi was trusted to one of Tasmania’s last remaining free-hand sign writers Kevin Brown from Spectrum Signs.”

Nuts and bolts wise, this Legend 900 is one of only a few to have full-length double-row chassis rails and it’s fully optioned from the factory plus over nine A4 pages of dealer-fit extras, some of which are listed below in the specifications.

Transmission is as you’d expect the heavy-duty RTLO22918B Eaton 18-speed that spins the main tail-shaft fitted with SPL 250 service-free universal joints connecting the Meritor RT50-160GP diffs. The front diff and power divider are equipped with an oil cooler and cross-locks are fitted to both axles. The final drive ratio of 4.56:1 is well suited to the operating environment in Tasmania. 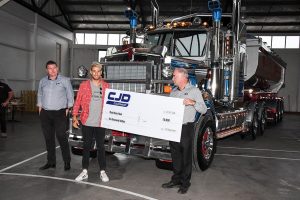 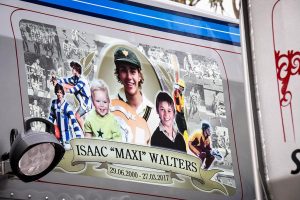 On Thursday, March 22 during the small handover ceremony of the Legend 900 held at Entally Lodge in Hadspen, CJD Equipment General Sales Manager, Chris Saltmarsh, presented a cheque to the Make Runs Maxi charity, who was absolutely blown away by the extremely kind gesture.

The contribution of $10,000 to the Make Runs Maxi charity, was made possible by Chris Saltmarsh generously donating the commission he would have received for the sale of the vehicle as well as contributions by CJD Equipment.

These funds will help the volunteers connect with communities, schools, and sporting clubs to push their message around positive mental health, resilience, and fulfillment, and trying to prevent more suicide deaths by young teens.

“It is a truly selfless act of generosity,” Chris Walters said in thanking Chris Saltmarsh, all involved at CJD Equipment and Kenworth for their continued support and generous donation to the charity. “We can’t thank Chris enough for going above and beyond with all his efforts over the past 12 months and were extremely proud and yet humbled by his generous gift.”

A few weeks after the handover we caught up with the driver, Craig Beams, back at CJD Equipment’s Launceston dealership to join him on a run in the Legend 900 to deliver a new Volvo EC220DL excavator to a jobsite a few hours away. 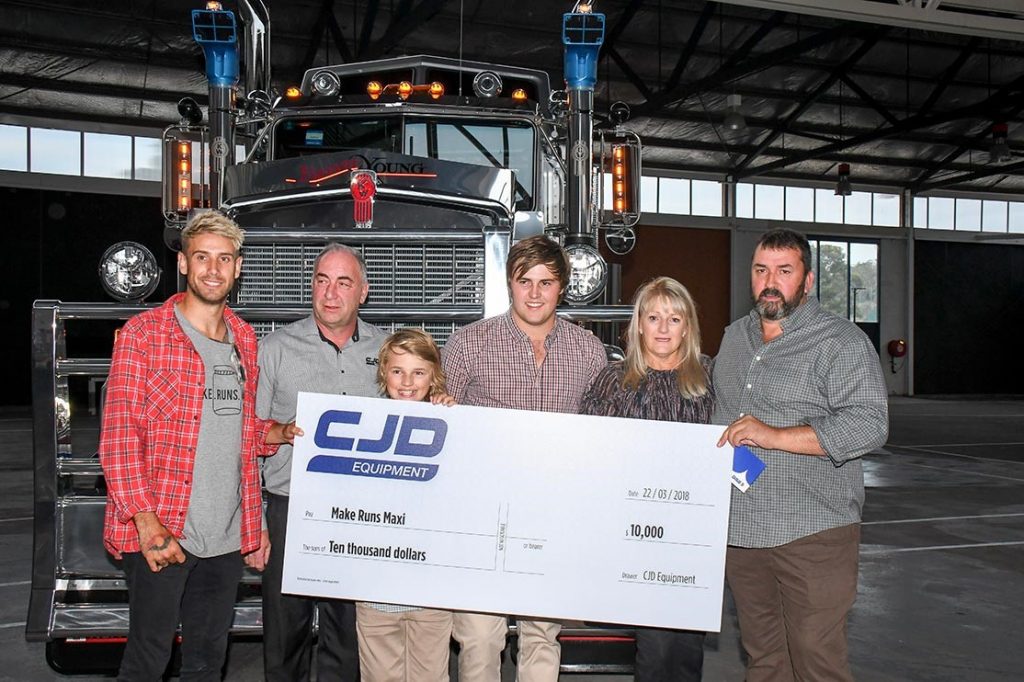